No Customs between the EU and the UK after Brexit? 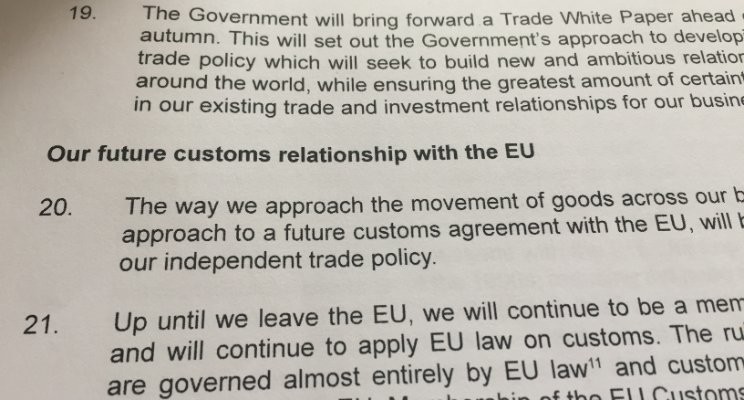 Yesterday, the UK Government publicly released a paper addressing the future country’s customs relationship with the European Union after Brexit.

Despite the paper’s timing of release – on a day when many potential readers of the document are enjoying (European) beaches – yet “Future Customs Arrangements – a Future Partnership Paper has not passed unnoticed.

In the document, the UK officials also envisage a new, unprecedented model of customs partnership with the EU: for imported goods that will be consumed in the EU market, the UK would operate a regime for imports that aligns precisely with the EU’s external customs border, even if they are part of a supply chain in the UK. Accordingly, “the UK would need to apply the same tariffs as the EU, and provide the same treatment for rules of origin for those goods arriving in the UK and destined for the EU”.

HM Government clearly states that such customs relationship would “remove the need for the UK and the EU to introduce customs processes between us, so that goods moving between the UK and the EU would be treated as they are now for customs purposes”.

At the same time, the UK would be free to apply its own tariffs and trade policies to goods imported from consumption in the UK, “in line with our aspiration to an independent trade policy”.

Evidently, HMRC admits that the new arrangements would call for important technological developments to ensure that goods which have not complied with the EU’s trade policy stay in the UK, namely a tracking mechanism for imports or a repayment system if an import paid higher duties than those of the country of final destination.

This model of customs relationship is quite unprecedented and if the EU stays to the words pronounced by its leaders immediately after the 2016 referendum “the UK cannot have ‘single market a la carte’”, much negotiation with the EU will be needed.

An alternative, according to the Paper, would be a “highly streamlined customs arrangement” with the EU. Meaning: there would be still customs clearance procedures, but fast and highly automatised.

However, assuming that, under the boldest proposal, the customs relationships between the EU and UK for goods destined to the European soil remains the same after Brexit, with no real “border”, there will be significant repercussions for the e-commerce industry: we only need to mention that currently roughly 70% of e-commerce products imported from China to the EU transit via the UK.