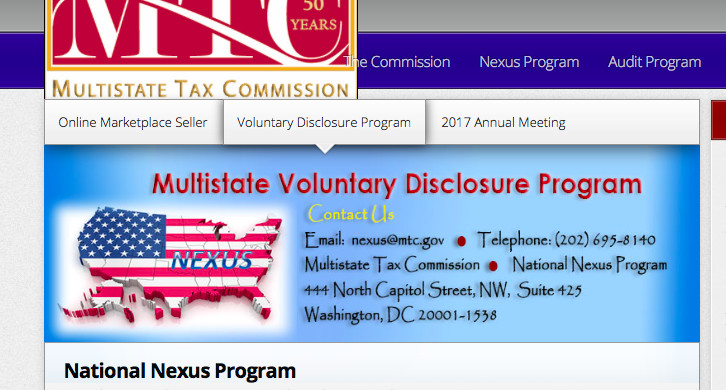 24 U.S. states have already joined the Voluntary Disclosure Program for online merchants who have failed to register for sales/use/income/franchise tax in the U.S. on sales carried out via marketplaces.

The Program has been master-minded and promoted by the Multistate Tax Commission (MTC), an intergovernmental state tax agency promoting uniformity in state tax laws throughout the U.S.

It is rather a unique occasion for merchants who have failed to register for taxes in the U.S. so far. As specified by the MTC, a Voluntary Disclosure Agreement is a “written agreement in which the taxpayer discloses and pays back state tax liabilities plus interest and files returns for a limited number of prior tax years, the “lookback period”. In return, the state partially or completely waives penalties and agrees not to assess tax and interest prior to the lookback period (except for collected but unremitted sales, use or withholding tax)”.

A quick step back for the benefit of our readers’ understanding.

U.S. and foreign merchants selling products online to U.S. consumers via U.S.-based fulfilment facilities are mandated to pay sales tax in every U.S. state where the merchants hold a “Nexus”.

According to a definition by the Sales Tax Institute in Chicago, the “nexus” is: “…A sufficient physical presence, is the determining factor of whether an out-of-state business selling products into a state is liable for collecting sales or use tax on sales into the state. Nexus is required before a taxing jurisdiction can impose its taxes on an entity”.

However, each state has its own interpretation of what represents nexus.

Classic example: a fulfilment warehouse in a state can trigger sales tax liability in that state. Accordingly, merchants using Fulfilment-by-Amazon are more likely than not to hold nexus in those U.S. states where Amazon stores the relevant stock.

Not only: brands allowing consumers to buy products online and then pick such products or return them at a street store in a U.S. state may hold a nexus in the latter state. Among other factors, advertisement activities may also trigger the nexus.

Under specific conditions, income tax must also be reported and paid on those sales.

The significant increase of marketplace-based sales in the U.S. during the last decade has brought on a growing trend of tax evasion. The Sales Tax Amnesty is one of the remedies to the current situation.

Besides the evident requirement of a timely and formally correct online application for the Program, various other conditions need to be met by each merchant to access the Sales Tax Amnesty, among which:

·     In spite of its tax liability, the applicant must not be registered for sales tax in the concerned state at the time of application and must not have ever had “any other prior contact with the state concerning liability or potential liability for such tax type”. Accordingly, the Program is not open to those merchants who have failed to collect, report and/or pay sales tax when they were already registered for Sales Tax in that very same state;

There is minimum tax liability for Voluntary Disclosure. Applications will not be processed “when the good-faith estimate of tax due to a state for the lookback period is less than $500”.