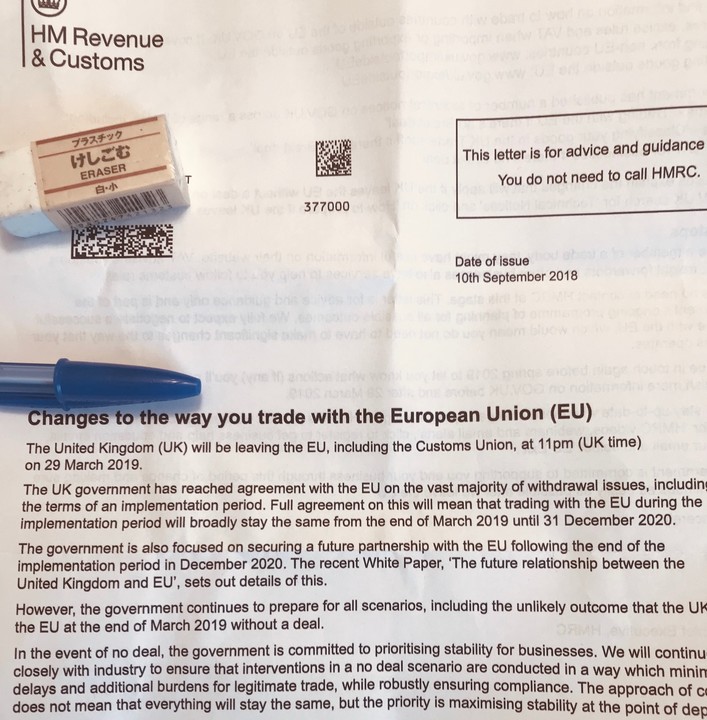 Over the past decade, the United Kingdom has become by far the biggest European Union hub for electronic commerce imports from around the world. Experts in the postal industry insist that currently one-third of all EU imported electronic commerce goods arrive in the U.K. either for consumption or diversion to other EU member states.

But that growth has its costs. According to the European Commission, the costs are 2.7 billion euros in uncollected custom duties that, Brussels insists, the U.K. must repay on goods that were imported between 2011 and 2017 primarily from China and then shipped onto to other EU member states. If the chasm between U.K. government and Brussels were not big enough (due to the Brexit negotiations), the EC gave the U.K. two months to pay or face a European Court of Justice.

Based on EU budget rules, a portion of all custom duties and VAT are used to pay the EU’s annual budget totaling around 146 billion euros.But as it has insisted this the dispute over the custom duties, first erupted in 2017 when the EU fraud fighting agency known OLAFpublished a reported detailing the allegations, the U.K.’s HMRChas categorically rejectedthe claims. In a statement issued Sept. 25 the HMRC insists it has a “very strong track record for tackling evasion and rule breaking” and it does not “accept liability for the alleged losses or recognize the estimate of alleged duty evaded”.

In order to understand the dispute, it is necessary to appreciate that one of the reasons for huge explosion in imported electronic commerce goods purchased from Asian can be traced to the infamous EU “de minimis” rule that exempts VAT on any item valued at 22 euros or less imported into the EU from abroad. Numerous studies indicate that companies routinely manipulate the VAT exemption rule and undervalue imported goods, especially those from China. Who writes has witnessed this.

This flow of VAT exempt goods was a key reasonEU finance ministers were able to unanimously agree to end it when they passed the revision of EU electronic commerce legislation in 2017. As a result, the VAT exemption will endas of Jan. 1, 2021.

But getting approval for eliminating the small consignment exemption was not easy. Why? Because both national postal services as well as national customs agencies insisted they did not have the resources to start checking the huge inflow of imported goods marked below 22 euros.

For experts in the postal service business, this argument cuts to the heart of the EU-U.K. dispute: there is simply no way the U.K. customs officials had the resources to do the kind of checks that would have been required to collect the duties the European Commission is now demanding.

In the words of one top EU postal expert, the failure to collect sufficient duties is an EU-wide problem and the problem is magnified in the U.K. because it is by far the largest depot for the imported goods and is therefore in the EC’s crosshairs. The expert also insists that if the EU looked at a few other EU countries, especially in France and Germany, they would also find flaws in collecting custom duties – albeit nowhere the amount at stake with the U.K.

As an example of how Asian importers have manipulated the EU de minimis VAT rule and how it can be overcome postal experts point to a new digital tracking system adopted in Sweden in March. The new rules require importers to submit forms in advance and gives authorities the right to automatically impose VAT fees. The result: the number of goods imported to Sweden in a day dropped in a matter of days from 150,000 daily to less than 15,000.

Experts say that these kinds of enforcement procedures are now being implemented around the EU. Between these changes, the upcoming elimination of the “de minimis” VAT exemption and new market trends, the kind of dispute between the EC and the UK HMRC over uncollected customs duties should become a problem of the past.

Of course, since the EC-U.K. customs duty dispute erupted many commentators have tied the issue to the Brexitnegotiations, especially when it comes to the dispute over the Irish border. By highlighting the failure of HMRC to collect 2.7 billion euros in custom duties, the argument goes, the U.K. cannot be trusted to collect duties and VAT on behalf of the EU – as outlined in British Prime Minister Theresa May’s Brexit proposal.

Experts downplay that possibility. But they do note one sure thing about how Brexit is shaping the EU electronic commerce import market: large postal services from Asia, including China Post and AliExpress are either moving or establishing new hub operations outside of the U.K and in other EU member states.

As those trends unfold and the EC does file a complaint against the U.K. in the ECJeither later this year or early next, the legal dispute is expected to linger. The ECJ process is expected to take at least two years if not more. And assuming Brexit does happen in March of 2019 – regardless of whether it be hard or soft -, one cannot help but recall the famous demand by former U.K. Prime Minister Margaret Thatcher, who successfully convinced other EU member in the late 1970s that the U.K. should get a rebate on its EU budget contribution.

“I want my money back” thundered Thatcher in what is now a phrase etched into the annals of the always tortured EU multi-annual budget negotiations.Expect the EC to co-opt that line with ever increasing volume in the months (and years) to come.