U.S. formally asks the EU to “ditch”​ the Digital Tax 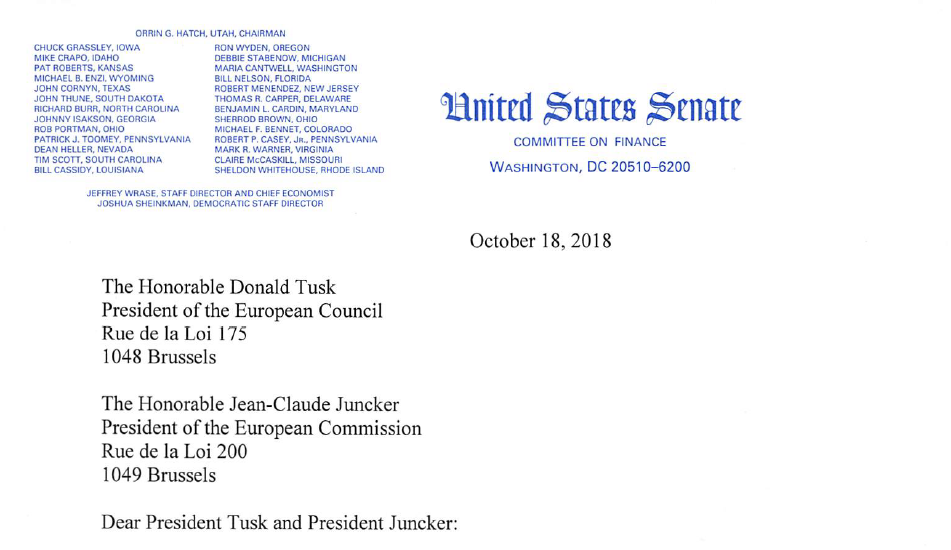 It was only a matter of time before the United States fired an unequivocal shot across the bowofthe pending European Union Digital Service Tax over objections that the levy is discriminatory and a violation of current international tax rules.

That U.S. assault landed last week in a letter sent to European Commission President Jean-Claude Juncker and European Council President Donald. But it was not a Donald Trump tweet that conveyed the message. It was the U.S. Senate Finance Committee, which writes tax law in the U.S. Congress and was the chief author of the recently approved U.S. Corporate tax reform.

In a rare show of bipartisanship for the U.S. law-making body, the missive – signed by Republican chairman Orrin Hatch and his Democratic counterpart Ron Wyden – insisted the EU must “abandon” the DST because U.S. tech companies that will have to pay the 3 percent tax. Just as important the letter stated the DST “violates the long-held principle that taxes on multinationals should be profit-based, not-revenue-based.”

Perhaps even more important the letter states that the DST is a trade provocation that could will upend the current US-EU trade detente and put the Trump Administration on the offensive again against EU products, including German cars.

“The EU DST proposal has been designed to discriminate against U.S. companies and undermine the international tax treaty system creating a significant new transatlantic trade barrier that runs counter to the newly launched US and EU dialogue to reduce such barriers,” the letter says. “Therefore we urge the EU to abandon this proposal, urge the member states to delay unilateral action and instead refocus efforts on reaching consensus with other leading economies within the OECDon any new digital taxation models”.

The U.S. Finance Committee also stated that the “EU already has a revenue-tax based on the location of the customer – the VAT. Consequently, the DST will undoubtedly lead to double taxation“.

Of course, the warning about double taxation issues are not only ones raised by the Americans. In September Ireland, Sweden, Finland and the Czech Republic wrote a letter to EU presidency holder Austria insisting that the DST will violate international bilateral tax treaties must be addressed.

At first Austria gave short shrift to the demands. Or, as one EU diplomat put it, Austria “is trying to sweep the issue under the carpet.” Subsequently Austria relented, and the double taxation issue will be discussed this week (Oct. 26) in a DST meeting of EU tax experts.

As for what triggered the U.S. Finance Committee warning the panel made it clear that the current all-out political and technical offensive led by Austria – and bolstered by French Finance Minister Bruno Le Maire – in order to get an EU DST agreement by December was “troubling news”.

Interestingly the U.S. arguments against the EU DST seem to be on solid legal ground. At least that is the way OECD tax chief Pascal Saint Amans sees it. During a lecture on international tax delivered earlier in Octoberin Brussels, Amans, a Frenchman, said the EU has a “two hemisphere brain” when it comes to digital taxation. He said while the EU wants to tax U.S. tech companies with the DST the EU does not want China and India to use the same kind of revenue-based indirect levy on its own companies.

Amans went further by insisting that with the new U.S. corporate tax reform adopted in December the EU and other foreign countries can no longer claim that U.S. tech companies no longer do not pay tax. That, he said, is due to the minimum tax provisions in the provision of the U.S. Corporate tax reform known – rightly or wrongly? – as the GILTI (the global intangible low-taxed income). Based on the GILTI provision all U.S. multinationals tech companies will have to pay a minimum of 13 percent on repatriated income.

Whether or not Amans’ warning and the U.S. Senate Finance Committee message will slow down the Austrian presidency DST cavalry charge will likely be determined – as has been the case for much of 2018 – on how Germany reacts.

To date German Finance Minister Olaf Scholz has been doing a delicate dance vis a vis the pressing demands of Le Maire. The French finance minister will up the ante this week when he takes his campaign to the European Parliament and insists that approval of the DST is vital in order to fend off anti-EU forces in the 2019 European elections.

Scholz‘s dodge-and-weave tactic to date to keep Le Maire at bay has been to flatter him with words espousing the need for “fair taxation” and other diplomatic niceties that signal theoretical support for taxing large internet companies but do not give outright DST backing. Of course, the main reason for German DST reluctance has to do with fears that it could imperil German exports, including cars to the U.S. as well as those sold in China and India.

In what some tax experts see as a German led-effort to find political cover for backing away from the DST, Scholz has recently been pushing for a global minimum corporate tax rate. He seems to have gotten Le Maire on board for the initiative and it will be pushed by the two countries in the OECD.

But will it – along with the U.S. letter – be enough to cut off the Austrian-French DST cavalry charge at the pass ahead of the upcoming EU Council of Finance Minister meetings in November and December? Watch this space.